It’s been a crazy year, and a busy year. I tried a lot of different kinds of posts here at Game Geekery since the last review, and there’s been a lot of GURPS goings-on, so today I’m looking back over the highlights from 2016. Hopefully you’ll find some gems in all these links and look-backs that you missed the first time around.

To start with the biggest negative, my home gaming was virtually non-existent this year. I put the group I was GMing for (modern day supernatural hunters in L.A.) on hiatus in 2015 and, so far, we haven’t started up again. On the other hand, my one-shot convention games remained really strong in 2016. I ran all three adventures multiple times at their respective cons and the tables always had a blast:

Orccon 2016
Locus: A Needle in Infinite Haystacks (multi-dimensional search and rescue for a lost human)

I have every intention of again attending and GMing at all three local Strategicons in 2017, so hopefully I can keep this streak going!

How to Be a GURPS GM

Reaction to “How to Be a GURPS GM” this year continued to be more positive than I could have ever hoped, and I received quite a few very humbling messages from readers. Perhaps my favorite was this one:

“The game I’m running is with my family. My wife and three children (ages 6-9). When I wake up on Saturday, first question from the kids is ‘Can we play GURPS today?’ And your book is the only reason it’s happening.”

The thought of a gamer out there reading my book and becoming enthused enough to start up a GURPS game for his family is, literally, the kind of thing that keeps me posting! Truly awesome.

I was also very pleasantly surprised when Steve Jackson Games announced that HTBAGG was to be included in hardcopy as part of their recent “Dungeon Fantasy Game” Kickstarter. That, coupled with a near-historic massive sale on PDFs, led to a nice bump in sales back to levels not seen since a month or two after release! 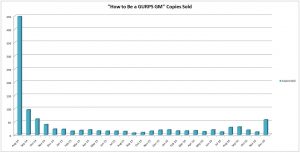 I am really, really hoping that there will eventually be some way to purchase hardcopy versions individually — I know many gamers (and non-gaming friends and family) who still don’t register a PDF as a “book,” and I would love to be able to gift them physical copies.

As for Game Geekery itself, these were the most popular 2016 posts actually written in 2016:

GURPS Shotguns – This is My Boomstick

And these are the most popular in 2016 but written elsewhen:

Every one of those posts (with the exception of “Printing RPG PDFs…”, and its broad appeal well outside of GURPS) is in some way trying to demystify the GURPS rules and/or boil them down to their simplest core without all the layered options that newcomers all too often mistake for “too complicated” or “too much math.” Since my primary aim with Game Geekery has always been to help gamers see that GURPS is not even remotely as complicated or difficult to learn as the persistent rumors might suggest, this tells me that I’ve hit the mark pretty solidly in terms of readership and demographics.

There were also a number of posts not in the top 10 that either tried something new or continued to build on existing series:

The Bunnies’ Tale
A second Quick-Play Adventure, wherein the PC rabbits must find their back to their home warren.

The Bunny Story and The Briefcase Story
Getting away from rules-specific posts, these two posts gave me a chance to share some amusing anecdotes from my gaming past.

[Audio] Answering Reader Questions 01
My first-ever audio post, sort of a 15-minute mini-podcast. Response to this one was particularly high, and a second one is already in the works.

GURPS Quiz
Another first, this time a quiz testing general knowledge of GURPS in honor of its 30th anniversary.

Lots of promising stuff in there, things I hope to continue building on in the coming year.

The Year in GURPS

2016 saw a lot of GURPS activity, both official and fan-based, especially in the second half of the year. I’ve already mentioned most of these individually, but in summary:

In addition to (probably too many) personal goals for the new year, I also have a number of gaming-specific ones: 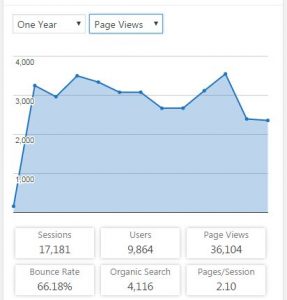 12 months worth of Page Views

To help me continue improving the site and decide on which posts to concentrate on, I have a quick poll below if you have a moment. Otherwise, thanks for reading, thanks for all the support in 2016, and I hope to see you back in the new year!