I was tinkering with the GURPS Quick-Start Character Creation system I posted a while back, and added a few tweaks for more powerful characters. 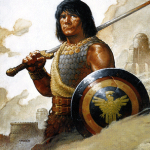 As mentioned in the original article, the system can easily be modified by changing the underlying assumptions. It’s great as written for creating PCs of a certain power level, let’s call it “Notable,” but the math is too restrictive for emulating characters of higher point values.

To remedy this, I changed the original section entitled “Concept and Attributes” just a bit (to introduce the idea of adding a set number of points to the attributes, instead of automatically dictating the scores):

Concept and Attributes: PCs are assumed to have a default 10 for all attributes unless it is specifically changed. The player writes down a name, brief description, and then chooses one of the three options below to describe his character, which the GM uses to assign 6 additional points to the four basic attributes (to maximum of 5 points in any one attribute, i.e., no higher than 15).

The possible values for the blanks below are “Strong” (ST), “Dextrous” (DX), “Sharp” (IQ), and “Tough” (HT) (again, the GM should change to whatever fits better for the particular game).

This, in turn, paves the way for the following table. The “Notable” column is the system from the original post, the “Heroic” and “Epic” levels are more powerful versions achieved by fiddling with the math:

The biggest difference is the “Heroic” and “Epic” levels have more attribute points to spend. The relative levels of the skills allowed remain the same (since the underlying attributes will probably be higher), but the number of skills increases.

This small change should make the system even more useful, allowing GMs to spit out pre-gens and other characters for a much broader range of power levels. Here are updated character sheets for each of the three levels:

And, here are examples of each level using the character Conan at different stages of his adventuring career:

Now, are these fully fleshed out, campaign-ready PCs like you would get from the normal character creation in GURPS Basic Set? Not by a long shot. On the other hand, it took me 20 minutes to make all three, and each one is absolutely playable for a quick one-shot game.

I’ll post more examples as they come up. Anyone else tried this system for making quickie pre-gens? I’d love to hear how it went!

What is life? It is the flash of a firefly in the night. It is the breath of a buffalo in the wintertime. It is the little shadow which runs across the grass and loses itself in the sunset.
-- Crowfoot