In “Streamlining GURPS” parts One and Two, I talked about a host of rules tweaks and options for speeding up combat at the table. This post is about streamlining as well, but through the use of tokens and colored dice instead of rules. (I first mentioned this system here, but I’ve made a few tweaks and have better pics since then — apologies if you’re already familiar.)

Before we get to rolling for the NPCs, though, let’s speed up the Player Characters themselves.

The default GURPS combat flow has the PC roll to attack; if he is successful, then his target rolls their defense; and if that defense fails, the PC rolls damage. However, once a group has the basics of the rules down for a few turns, there’s no reason they can’t roll all those together using sets of different colored sets.

For example, Officer Duncan has a Guns (Pistol) skill of 14 (three blue dice), wielding a pistol that does 2d+2 pi damage (two red dice), against a target with a Dodge of 10 (three black dice). Instead of rolling 3d6 to attack, waiting for the GM to roll 3d6 for the NPC defense, and ultimately rolling 2d for damage if successful, the player can just roll 8d6 and generate all three rolls at once (a dice cup might come in handy): 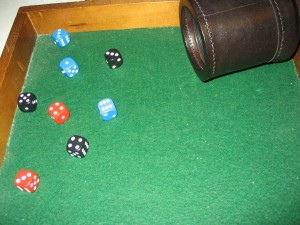 The attack roll (blue) was 10 against a skill of 14, so a possible hit; the NPC’s defense roll (black) was 12 against a Dodge of 10, so he fails to dodge; and the damage (red) is 9 points (7 rolled, +2). (Depending on his pistol’s Rcl and RoF, Duncan may have hit with more than one shot, but let’s not get sidetracked.)

If a roll isn’t needed, simply ignore the results (like if the defense was successful, then there would be no need for damage). When a group with the average 4-6 players all do this on their turns, the time savings can really add up — you’re eliminating two of every three “rolls” by consolidating them all together.

In a similar vein, we can speed up rolls for NPC enemies by a huge margin as well, using sets of colored and numbered tokens. The meeples (used occasionally for “special” units, like lieutenants) are from Meeplesource, the glass tokens are from Alea Tools (and, sadly, appear to be temporarily out of stock), and the dice are from this Farkle Party Game. The colors are red, green, yellow, blue, black, and brown — everything matches pretty well, except the red meeple is pink and the blue one is purple (they do sell red and blue meeples, I just haven’t grabbed ’em yet because I don’t use the meeples nearly as much as the tokens); and the brown dice are more of a light tan. 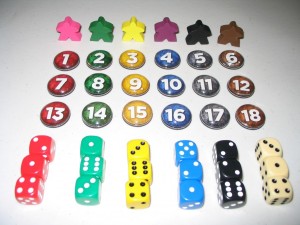 Okay, so how does all that help? Well, let’s use this as an example: 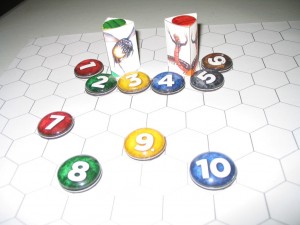 A couple of PCs (the tri-fold figures) have been beset by a large group of 10 enemies. “Only” 1-6 can attack this turn, as 7-10 have no ranged/long reach weapons. Normally, this would require six rolls of 3d6. Instead, a single roll of 18d6 can generate attack scores for all six NPCs at once! (A dice cup will definitely help for this. Some people prefer the smaller 12mm dice as well, but I personally love rolling scads of 16mm d6s.) 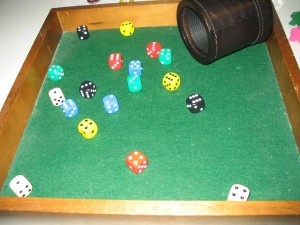 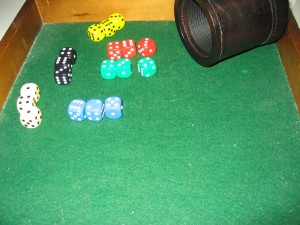 You can track up to 18 individual NPCs by breaking them down into three groups of six (after that, I start running out of tokens, since they’re only sold numbered 1-20… but so far, that hasn’t really come up).

If you really wanted to go nuts, you could also get yourself six sets of 12mm dice matching the colors of the above standard 16mm dice, and then roll NPC damage along with their attacks (big dice are attack roll, small dice are damage).

I was initially worried some players wouldn’t want to roll 8d6 or 9d6 instead of 3d6, but apparently… almost everyone loves rolling a bajillion dice as much as I do!

As always, hope this helps you at the table. I’d love to hear what you think, or what kind of results you’ve had rolling this way!

Tips and advice for speeding up GURPS at the table.
View the entire series