Today, I wanted to mention a new mapping program in beta that I quite like named Other World Mapper. I pledged for it on Kickstarter a while back (when it was nearly half the price), but as they are creeping closer to release, you can now buy the program in Beta for $60 (and, of course, receive the full version when it comes out).

Like many gamers, I looove maps (and if you’ve never checked out the Cartographer’s Guild website… do yourself a favor and go there now!) I’ve had the venerable Campaign Cartographer program (and a bunch of add-ons) for decades, since it was in its first version, but I’ve never really gotten the hang of it, not fully. It’s kind of like Photoshop to me — I can use it well enough to get the basics done, but I know I’m only using the tiniest bit of everything it can do, and even then it takes me forever to eke my way through things. (CC3 is also massively expensive, once you start figuring in all the add-ons you need to do things beyond the core program.)

Other World Mapper (OWM), on the other hand, is nothing like that. My main delight with it is ease of use. I can muddle my way through the interface well enough to do what I want and have it come out looking pretty decent in a fraction of the time.

I whipped together this dungeon map in probably an hour and a half: 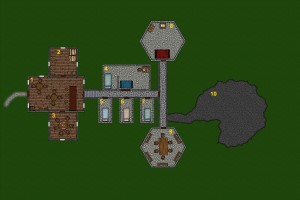 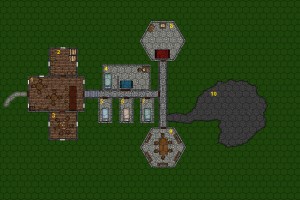 I mean, it’s not a work of art, but it’s pretty good, right? And functional — after 90 minutes, I could drop it into Roll20 and use it for a game.

Since I have the latest Beta now, I decided to redo the “maps” (that’s being kind) from my two Quick-Play Adventures to make them look less like Power Point slides (the PDFs have been updated on the downloads page as well — by the way, I also added a line for bows to the “Enemies” page of “Race for the Dutchman”).

Each one only took 20-30 minutes to make, and I really like the improvements:

Race for the Dutchman 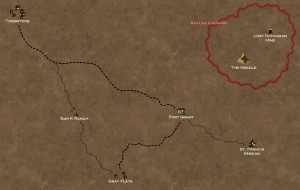 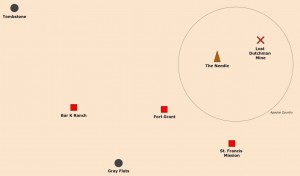 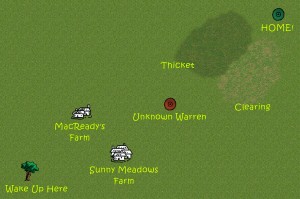 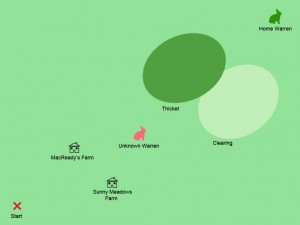 I’m looking forward to the public release of Other World Mapper (and hopefully even more symbols and whatnot to work with), but even as it is right now, it’s a great product. You can also see it in action, being used, in their official videos.

For those not looking to buy more software but who still need to make maps for their games, there are a ton of free browser-based options out there that let you draw, save, and print your overland and/or dungeon maps. Some of my favorites are ANAmap, Dave’s Mapper, Dungeon Painter, and Inkarnate. Give ’em a try!

And, finally, just because you want to use maps in your games doesn’t mean you have to make them yourself. There are a lot of gamers out there making maps, most of them far better at it than me, so I frequently just poke around and see what’s out there. Sometimes I find maps that are so striking, so well-done, that they actually inspire entire adventures just by themselves. (“I wisely started with a map, and made the story fit.” — Tolkien)

In addition to the hundreds (probably thousands) of maps you can buy on DriveThru, the internet is also bursting at the seams with crazy good maps. Pinterest (example) and DeviantArt (example) are great places to look, as is the above mentioned Cartographer’s Guild. And don’t forget the good old-fashioned Google search (example).

How about you, do you have favorite programs/tools when you’re making maps? Any great collections of gaming maps you keep up on? I’d love to hear about them!