Each Halloween I try to run a one-shot GURPS Horror game for the non-gamer and gamer-curious among my friends. So far this year, I’ve run two of the three groups I was able to schedule, and we’ve been using this little hack to the usual GURPS Fright Check rules to great effect.

The PCs start the game with a small dish of tokens representing their “Sanity Points” (SP), equal to IQ. If they fail a Fright Check, instead of consulting the usual table they roll the (metal!) Cthulhu die with the following results: 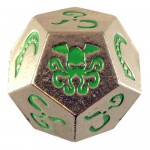 I roll the d6 for the stun while they roll the Cthulhu die, so it takes no extra time. In the second game, one of the characters failed his first Fright Check and rolled Cthulhu, Cthulhu, Tentacle, then rolled double sixes for a grand total of 14 SP lost in a single go (6+6+2). The player giggled maniacally as his PC sat on the floor, rocking, and he chose another pre-gen.

Effects of Sanity loss are:

(I do have many, many other blog posts percolating! But this one jumped the line because it was short and timely.)