Welcome, GURPSers, to the final basic post of the “New to GURPS” series! The series will continue in the weeks ahead, but we’ll be expanding past GURPS Lite and out into the actual GURPS Basic Set, Characters and Campaigns.

Today, Rex‘s swan song, is an overall review of the previous basic posts, tying them together into a single long example of play.

We join now the heroic and long-suffering Rex as he rides the open plains in pursuit of an escaped scoundrel named Pistol Pete, attempting to capture him for the reward money ($250 dead, $500 alive). In the weeks that we’ve been  putting Rex through his paces, he has chosen to learn a new skill: Tracking, known at level 12. 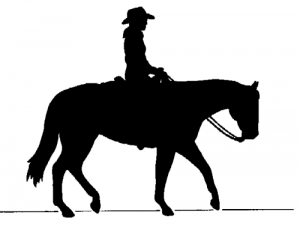 Rex has been on Pete’s trail for a couple of days now, and awakes before sunrise to resume his chase.

Rex (technically, Rex’s player): “After breaking camp and readying my horse, I set off to once again pick up the trail of Pistol Pete.”

GM: “After a few minutes of searching, you pick up the trail once more, heading east.”

Rex: “Cool. I mount my horse and continue the chase.”

Rex follows Pete’s trail throughout the day, from the open plain into a large canyon of high rocky cliff faces. At one point, where the canyons branch off into three different directions, Pistol Pete had earlier used his own Tracking skill of 11 to try and cover his trail. If he wins this contest, it could cost Rex enough time that he loses Pete altogether.

GM: “As Rex approaches a three-way junction just inside the canyons, the trail abruptly turns cold. It seems Pistol Pete is trying to confuse any pursuers by covering his tracks. Please make a Tracking roll.”

GM: “After checking each of the three winding canyons, it seems clear that Pete went down the one on the right.”

Rex: “I’m comin’ for you, Pete! I continue on into the right canyon.”

At this point, Rex (and his player) don’t actually know if they’ve succeeded, since they can’t know what Pete’s margin of success was. But from Rex’s point of view, he went that-a-way.

Rex continues riding down this narrow canyon, even though he is unable to again pick up Pete’s tracks (the ground has become harder and harder, and he fails a Tracking roll at -4). After an hour or so, the canyon widens and branches again into two directions.

GM: “While pondering which direction to go, you notice a slow-moving wagon headed your way from the left canyon. A single mule pulls it, and there is an old prospector-type at the reins.”

Rex: “When he is close enough for conversation, I greet the old man warmly. ‘Hello, stranger. Care for a swig?’ I offer him a bit of whiskey.”

GM: “The man eyes you warily, but seems to soften a bit when you mention whiskey. He says, ‘Much obliged, young ‘un,’ and takes a long drink.”

Rex: “As we chat, I ask him if he has passed anyone in the canyons today.”

GM: “The old man tells a few off-color jokes, and then when you ask about other travelers, he says that he hasn’t seen another soul all day.”

Rex: “Great. I let him keep the bottle, wish him well, and ride into the right canyon.”

The canyons eventually give way to more open plain, and by nightfall Rex finds himself in the tiny town of Donkey Flats.

GM: “The entire main street is less than a dozen buildings — a saloon, a hotel, some private homes — and the few townspeople you see eye you without apparent interest.”

Rex: “I tie up my horse in front of the saloon and go inside. If I don’t see Pistol Pete, I’ll order a whiskey, but I’m not letting my guard down in a place like this.”

GM: “Pete is nowhere to be seen, but as you’re enjoying your drink the stranger next to you, presumably a henchman of his, throws a punch! Please roll to Parry or Dodge.”

Since Rex said he was staying alert, the GM decides he can attempt a defense against this surprise attack. Alternately, he could have asked for a Perception roll to see it coming.

GM: “Your kick slams right into the man’s chest and knocks the wind out of him. He crumples to the floor, trying to catch his breath, but before you do anything else, please make a Perception check.”

GM: “You notice out of the corner of your eye that Pistol Pete is standing at the top of the stairs, drawing a pistol from his belt.” (His maneuver was to Ready the gun.)

Rex: “I Ready my own pistol to return fire and yell to everyone, ‘Get down!'”

GM: “As the crowd dives for cover, Pistol Pete fires three shots at you.”

GM: “Though two of Pete’s shots go wide, one rips through your hip for 8 points, ouch. Please make a HT roll to avoid Knockdown and Stunning.”

GM: “You somehow mange to stay on your feet in spite of the severe wounds, but you’re in really bad shape and at half Dodge and Move. Though you notice Pete’s henchman scrambling for the door now that this is a firefight, Pete himself is cocking back the hammer to finish the job. It’s your turn, what do you do?”

Rex: “If I get hit again, I’m a dead man. I’d rather go out in a blaze of glory and at least try to take Pete with me. I return fire three times.”

Rex rolls 3d6 three times against his Guns (Pistol) skill of 13, lowered to 9 due to a range penalty of -4 for being 8 yards apart, then lowered again to 5 for a Shock penalty of -4. Not surprisingly, he fails twice with a 12 and an 11… but his last roll is a 3! (Hey, after everything we’ve put poor Rex through, he deserves this. The life of an example character is nasty, brutish, and short.)

We haven’t actually discussed critical hits and misses yet, so that’s a little bonus for us, too. They’re explained on pp. 2 and 27, but the most important effects right now for Rex are that Pete has no chance to Dodge this attack, and it does maximum damage. For 2d+2, that’s a massive 14 points.

GM: “Nice! Your final shot slams into Pete’s chest, center mass.” (The GM rolls 3d6 against Pete’s HT of 12 and fails with a 13.) “He collapses to the floor, bleeding out and cursing you with his dying breath.”

Rex: “I limp awkwardly to the nearest empty chair and collapse into it… though, gun still in hand.”

GM: “The townspeople are stunned for a moment, then begin emerging from their hiding places. A young boy is sent to fetch the Doc, who arrives after a few minutes of the denizens of Donkey Flats congratulating you, pouring you drinks, and trying to keep you comfortable.”

GM: “The Doc tends to you for about 20 minutes. His bandaging and care restore 3 Hit Points to you, bringing you back up to 5 total. You are weak and in pain, and it will probably be a couple weeks of rest here before you are fully recovered… but, you got your man, and lived to tell the tale!”

Which applies to you as well, GURPS pilgrims — you have made it through the basic posts and lived to tell the tale. Hopefully, all of the above scenes made sense to you as you followed along. If not, feel free to post questions below or ask me some other way.

I want to thank you for reading all these weeks, and hope you’ll come back for more. If you take nothing else away from these posts, may it be this…

GURPS is fun, and GURPS is easy.

An introduction and welcome series for those brand-new to GURPS.
View the entire series