This past weekend was the always fun Orccon convention, where I ran an adventure set in my multi-dimensional city of Locus. The players all seemed to have a great time, and their feedback on the setting was very positive. Completing Locus is a big part of my goals for the year, so this week I’m looking at that adventure and what new things it reveals about the setting as a whole. 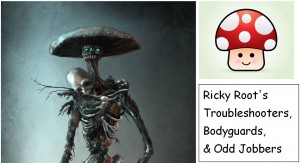 You can download the adventure packet — it contains the following, discussed further below:

In “A Needle in Infinite Haystacks,” two unfortunate Earth humans find themselves first transported to the chaos and craziness of Locus, only to then find themselves in the middle of a firefight between two local groups. The NWC, the Newcomers Welcoming Committee, rescue the man, but not before his fiancee is taken by so-called “bottom feeders,” denizens of Locus who prey on newcomers by herding them up and delivering them to massive automated food processing plants (as ingredients, not workers).

The NWC hires “Ricky Root’s Troubleshooters, Bodyguards, & Odd Jobbers” to rescue her, a task which falls to the PCs. Their investigation leads them to the giant insect mounds of the ant-like Nissifer, the “bottom feeders” who originally took her; to the jungle castle headquarters of the Dirty Hands mercenary crew who stole her from the Nissifer; and, finally, to a vid-prog shooting location in the home dimension of the bird-like Qell, a place of floating nest-cities and lethal glass shard plains.

Ultimately, the PCs learn that the NWC itself has less than selfless interests in play — they want the “rare mated pair of humans” so they can sell them at huge profit to the Locus Zoological Society, leaving the PCs to decide between honoring their original contract or saving the humans from a life of exploitation and slavery.

The adventure adds quite a few details to the setting:

Certainly, not all of these details will make it in their present form to the final setting, but I think together they start forming a good picture of the overall tone I’m going for.

At the table, the setting performed like a champ last week (as it has numerous times before). Everyone seemed on-board with the premise, they got the idea of being on the inside of a sphere quickly, and they frequently used the vast scope of the setting to seek out information and/or technology that could help them.

With a project that casts such a wide, wide net, I imagine there are things lurking on the edges that I’m missing entirely. I’d love to hear your thoughts on whether you think you’d enjoy adventures like this, aspects of the setting you really like/dislike, things you’d like to read more/less about, whatever. “Is Locus a place that sounds fun to adventure in?” is the most important question! The rest is all gravy.

See you next week!

The pan-dimensional city of Locus, nexus of all realities and adventure setting for GURPS 4th Edition.