Greetings, Folks! GURPSDay is again upon us, bringing with it dozens of new blog posts from all over the community. It’s like trick-or-treating, but with awesome GURPS content instead of candy!

With Halloween just around the corner, I thought it would be a good time to talk about Halloween horror one-shots. 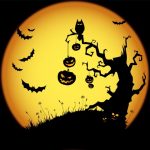 I have found Halloween one-shots to be one of the best ways ever to introduce non-gamers to tabletop RPGs. Come mid-October, people are looking for fun ways to celebrate the creepy, the macabre, the scary. Take advantage of the spirit of the holiday by inviting your non-gamer friends over to “Try out this story game. It’s just like [insert popular horror movie/TV show], except you get to decide what the characters do!” Seriously, running games “like” The Shining, Evil Dead, Nightmare on Elm Street, Blair Witch etc. over the years has brought a score of people into the hobby.

It’s an excellent introduction because people are (usually) very familiar with horror movie tropes, so they tend to be less overwhelmed by the sheer novelty of the whole experience. It also helps a great deal that the setting is usually “just like the modern world, except there are zombies/vampires/aliens/whatever,” and everyone knows what the modern world looks like.Another great thing about horror games is that the genre is incredibly varied. Is your threat supernatural? (Ghosts, vampires, chupcabra) Mundane? (Serial killers, cultists) Do you prefer a mystery (13 Ghosts, The Changeling), or action (The Descent, Aliens), or survival (The Walking Dead, 28 Days Later)? Are you going for a light-hearted “ooh, spooky” tone (Beetlejuice, The Witches), a more adult tone (The Exorcist, The Thing), or just flat-out mind-screw (Jacob’s Ladder, The Mist)?

So, this is what I do. Around early September, I decide who the core invitees are going to be. These are usually co-workers or friends who have expressed some interest in RPGs, and have agreed that “we should play a game sometime.” I create an adventure (the usual “five scenes for a one-shot” deal) tailored to the kinds of horror movies they enjoy (if I don’t know, I just ask — “Hey, ever seen American Horror Story? Did you like Season 3?”). Once they’re invited and a date has been set, I round out the player group to four (my preferred group size) with other people I think would enjoy it. If this is the first RPG for the whole group, so much the better!

I provide pre-gen characters, keep the rules to a minimum, and explain the game as “like a movie where you get to make the decisions for the characters. Sometimes you’ll need to roll dice to see if you succeed at various things, I’ll tell you what target you’re trying to beat.”

Every once in awhile, there will be a dud. Someone you thought sure would enjoy RPGs just… doesn’t. But, that happens a lot less than you might think. In my experience, the vast majority of people who are willing to try tabletop RPGs have a grand ol’ time and discover a completely new way to enjoy themselves. And you’ve gained a new body for the player pool!

As for the game itself, try to keep it simple.

You can also just convert your favorite horror movie/TV show into an adventure, or use some of these below. Some are for systems other than GURPS, but are worth the conversion.

A couple more books that absolutely deserve mention are GURPS: Horror and GURPS: Zombies. They may be a little overkill for a single one-shot, but if you’re really interested in running horror games, they are amazing resources. (And if you are — I’d also heartily recommend Stephen King’s Danse Macabre.

Do you have any favorite horror adventures? Tips to share? It’s not too late to round up a table for some Halloween horror!

One other thing to mention… a week ago or so, I set up an unofficial Discord channel for GURPS, and it has been growing by leaps and bounds. We’re up to about 65 members, including a number of authors, app developers, frequent forum posters, and enthusiastic fans! I’m usually there for a good part of the day once I’m home from work. If hanging out and chatting about GURPS — rules, characters, tips, whatever — is your idea of fun, just click that link and head on in. All are welcome, and Discord is super easy to use. Hope to see you there!