Mmm, Thursday — breathe in the GURPSy goodness! Today’s original “New to GURPS” topic was on recovering from injury and wounds, but I’m bumping that until next time so we can take a look at something I’ve received a few questions about recently: the role of gear/equipment, and how it affects your character.

GURPS loves gear. Loves it. Beyond the basic Equipment chapter in the Basic Set (pp. 264-289), there are entire volumes devoted to nothing but page after page after page of new and varied equipment, weapons, and armor so you can outfit your character exactly the way you want to. The main ones are:

Just those alone are nearly 1,000 pages, discussing and describing tools, medicines, weapons, armor, and general gear and technology, from the distant past to the farthest future. Some of the smaller books include gems like the various Loadouts (pre-made packages of items useful together) and the Spaceship series (for creating spaceships, or providing examples).

Point being — there are a ton of options out there for what you can equip your character with. For a lot of people, the broad and generic items from the Basic Set are plenty. Me? I completely love that I can choose from a score of different arms and armor, and that there is an actual mechanical difference between, say, an S&W Model 10 M&P .38 Special and an S&W Model 36 .38 Special (High-Tech, p. 94). 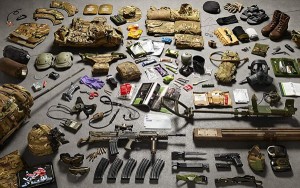 A few things to keep in mind about equipment:

With all that in mind, when it comes time to select your weapons and armor, you basically want to select the items you can afford with your starting wealth (p. 27) that also do the most damage and offer the most protection without slowing you down too much.

When I created Kerna for the intermediate series of posts, I cheated a bit because she’s not a “real” character, to be played, but rather meant to illustrate certain aspects of the game. So, the only gear on her sheet is weapons and armor… no rope, mirror, food, tools, books, maps, or anything not directly relevant to the examples at hand.

I also had the militia she is a member of subsidize her equipment — she is carrying about $1,800 worth of armor and weapons, but her starting wealth at TL3 would normally only be $1,000 (that would probably make them a Patron, pp. 72-74, if I wanted to charge points for it). I really wanted her to have some beefy armor, and a shield, because Rex, our example fighter from the basic posts, wore no armor at all.

Even if money is no issue, always remember the “without slowing you down too much” part of the equation. The more weight you carry relative to your ST, the more encumbered you become, which lowers your movement and your Dodge (p. 17). A ST 10 character wearing lots of steel and heavy plate armor, wielding a broadsword and shield, will be well-protected behind piles of DR… but may only be able to move 1 or 2 hexes per turn, and have a hard time dodging incoming attacks.

It’s important to find the balance between cost, protection, and encumbrance for each character. It was fine for Rex to have no armor, because in an Old West setting almost no one has any kind of armor, so he’s not at a disadvantage. A heavily-armored soldier, fighting alongside others in formation against similarly slow-moving enemies, won’t have as much issue with a low Dodge and slow movement as will a skirmisher tasked with hit-and-fade attacks against the enemy’s flanks.

Like most things with GURPS… the choice is yours.

Did I miss anything equipment-related you’re curious about? Forget anything that should be front and center? Let me know!

Remember sadness is always temporary. This, too, shall pass.
-- Chuck T. Falcon