Happy Thursday, the day when GURPS goodness descends upon us from all over the web!

Because the basic posts of the “New to GURPS” series were limited to things found in GURPS Lite, we haven’t yet talked about spells, something we’re about to correct. The default magic system is explained on pp. 234-253 of “Characters.”

For the most part, spells are just very specialized skills. Anyone with the Magery advantage (and a source of learning) can buy spells as if they were IQ Hard skills (sometimes Very Hard). The level of a character’s Magery advantage is added to their IQ for this purpose (for example, a wizard with an IQ of 14 and Magery 2 learns spells as though his IQ is 16), and the process for actually casting is on p. 235. Different classes of spells (i.e., information, missile, area) work slightly differently.

We’ll see a couple of spells in action in the upcoming combat examples, but as an introduction, let’s have Kerna cast a few easy ones to see the mechanics.

A small harassing mob of the Orcs local to Kerna’s outpost attacked in the night. They were easily rebuffed, but now the Knights Defenders are clearing the battlefield of the Orc dead and wounded. Kerna is given a detail of 10 men-at-arms to get the job done.

The first thing she does is pick up a broken spear shaft and cast Continual Light (p. 249) on the end. This is a Regular class spell, with a time to cast of 1 second (turn) and a fatigue cost of 4 (to get light equivalent to a fire). She takes the Concentrate maneuver for 1 second, and at the end of that turn rolls against her Continual Light skill level of 13, succeeding with an 11. She then rolls 2d (as noted in the spell description) and gets a total of 7 — the light will last for 7 days.

Kerna’s Fatigue Points are lowered from 12 to 8 (making her a bit tired), and the end of the wooden shaft now glows brightly. She uses that light to walk the field with her men, giving orders on how and where to assemble the bodies.

At one patch of the fallen there is an Orc survivor pinned beneath the bodies of his comrades, wounded but still snarling and baring fangs at the soldiers who approach. Rather than simply kill him with an arrow or endanger her men, Kerna stands 1 yard away and casts Daze (pp. 250-251) on the Orc, a Regular class spell resisted by the target’s HT, with a time to cast of 2 seconds and a fatigue cost of 3. She takes one Concentrate maneuver, then another (since the Orc can’t go anywhere).

The Orc rolls against his HT of 11 to resist the spell, succeeding with an 11 (a margin of success of 0). Since Kerna succeeded on her roll by more, the spell effect takes place. Kerna’s FP are lowered from 8 to 5 — she is now very tired. The trapped Orc seems unaware of the four guards who approach him. He snaps out of it when they roughly grab his hands and feet and bind them with manacles, but by then it is too late, and he is marched off to the outpost’s dungeon.

While her detail piles the remainder of the Orc bodies in the center of the field as instructed, Kerna sits down quietly to rest. Fatigue Points regenerate at the rate of 1 FP every 10 minutes of rest, so after about an hour her FP are raised from 5 to 11 (60 minutes of rest = +6 FP).

She walks to the scores of dead Orcs piled in the field and begins to cast Create Fire (p. 246), an Area class spell, with a time to cast of 1 and a base cost of 2. Because the pile is so large, Kerna wants to affect a 3-yard radius around the center, so the final FP cost is 6 (base cost of 2 x 3-yard radius; see the diagram on p. 239). She lays her hand on the ground at the edge of the area of effect, to avoid any range penalties, and takes a Concentrate maneuver for 1 second. At the end of that turn, she rolls against her Create Fire skill level of 11, failing with a 14. Oops!

Even a failed spell costs 1 FP (p. 235), so Kerna’s FP are reduced from 11 to 10. Annoyed, she kneels down again, takes another Concentrate maneuver, and rolls once more, still against her Create Fire skill level of 11. This time, she succeeds with a roll of 11. Her FP are lowered from 10 to 4 — she is very tired! Had her FP gone down to 3 instead of 4, her Move, Dodge, and ST would all be halved until she could rest (p. 426).

The pile of bodies is engulfed in flame. The spell itself will last for a full minute, and by that time the bodies should be burning enough that the flames will continue on their own, without magical assistance. Mission accomplished, the weary Kerna returns to the outpost for some much needed rest. 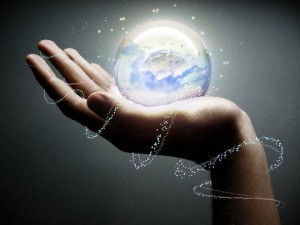 And presto, there you go! That’s the basics of magic in GURPS. For the most part, using a spell is like using any other skill, but some things to keep in mind:

See you next week for another look at skills and skill contests.

Your time is limited, so don't waste it living someone else's life. Don't be trapped by dogma - which is living with the results of other people's thinking. Don't let the noise of other's opinions drown out your own inner voice. And most important, have the courage to follow your heart and intuition. They somehow already know what you truly want to become. Everything else is secondary.
--Steve Jobs