Another week, another “New to GURPS” post! Apologies if you were expecting the first melee combat today — I realized that I’ve made no mention of Reaction rolls or Influence rolls up to this point and, since those mechanics are explained in GURPS Lite before the section on combat, I wanted to postpone melee combat until next week.

The last two posts have been about using your character’s skills to affect the game world. This week, we look at using specific skills (called “influence skills”) to interact with the NPCs in the game world.

When your character meets an NPC in the game, the GM has a system for randomly determining how they will react, as explained in detail on p. 3 of GURPS Lite. This is one of the very few GURPS rolls (the other being damage) where you want to roll high, not low. The range of NPC reactions runs the gamut from “I will murder you for looking at me!” on the low end to “You are my new best friend! Love me!” on the high end. Things like how your character acts, how he looks, and how you, the player, choose to approach the NPC all affect this roll (the lowest and highest results are outside the standard 3-18 range of a 3d6 roll, and cannot be reached without modifiers).

However, if your PC is skilled at any of the six “influence skills” listed on p. 24 (or even if he isn’t, but you want try at default level, p. 13), you can take matters into your own hands and attempt to guarantee a good result by winning a Quick Contest of your influence skill against the NPC’s Will score. Even if you fail the Quick Contest, the most extreme reactions (“Disastrous” and “Excellent”) are no longer possible — it’s now either a “Good” or “Bad” reaction (though using Sex Appeal changes those possibilities to “Very Good” or “Bad,” as using Intimidation changes them to “Good” or “Very Bad”).

Influence rolls are generally rolled so that only the GM can see the result (either by the GM doing the rolling, or the player rolling behind the GM’s screen), so that the player can’t be sure what the result is, since there’s no way the character could (at least, until it’s too late).

Our good friend and cowboy-on-the-rise, Rex, doesn’t actually have any influence skills as created, but we can assume for this example that after adventuring for some time, he has earned 4 Character Points (CPs) which he will spend on a single influence skill. The situation will play out in different ways depending on which skill Rex uses (and how well you roll). We’ll look at a few below.

Rex’s problem is that he desperately needs to get a message to “Dead-Eye” Cooper, but Cooper is taking a nap upstairs at the hotel and his partner, Madame Kay, won’t let anyone in to see him. “That ugly cuss is ornery enough when he isn’t tired!” she announces to the hotel’s saloon. “Nobody better disturb his beauty rest for the next couple hours.” Kay’s Will score is 12. 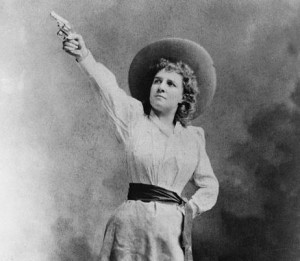 First, let’s look at Intimidation (it and the other influence skills are all detailed on p. 15). If you had put Rex’s 4 CPs into this, he would have an Intimidation skill level of 11 (see, “Buying Skills” on p. 13).

Rex attempts to bully his way past Kay to get to Cooper’s room (and remember, roleplaying out the scene with Kay could be worth a bonus [or penalty] to the roll, depending on how it goes). The GM rolls 3d6 for Kay against her Will of 12, with a result of 10… a margin of success of 2.

Roll 3d6: if the result is 3-8 (that is, if you succeed on Rex’s roll against his Intimidation of 11 by 3 or more, compared to Kay’s margin of success of 2), then Kay’s reaction to Rex is “Good” (note that in an actual game, you would not see this result as a player). She is friendly, and when Rex describes how important it is that he see Cooper, she lets him pass. If the result is 9 or more, though, then Kay’s reaction is “Very Bad.” She actively dislikes Rex for trying to disturb Cooper’s rest, and will try her hardest to make sure there is no way he gets in. (Had this been any influence skill besides Intimidation, a result of 9 or more would have been “Bad” instead of “Very Bad”; she still wouldn’t have let Rex in, but it would have been with less enmity).

Had Rex’s 4 CPs been put into Sex Appeal, he would (again) have a skill level of 11. Instead of trying to bully his way past Kay, he instead flirts with her and tries to butter her up enough that she’ll let him pass. The GM’s roll for Kay is 12, as is her Will, so her margin of ‘success’ is 0.

Roll 3d6: if the result is 3-10 (Rex needs a margin of success of at least 1 to win, and his Sex Appeal skill is 11), then Rex succeeds at putting the moves on Kay — her reaction to him is “Very Good” (this would simply be “Good” for any influence skill besides Sex Appeal). With a giggle and a promise of a late night rendezvous, she happily lets Rex past. Any other result (i.e., 11 or more) means her reaction is “Bad,” and we’re back to her barring Rex’s way, insulting the clothes he’s wearing, and making disparaging remarks about his mother.

Diplomacy is the least risky of the influence skills, as it assumes the PC is trying to be, well… diplomatic, willing to negotiate, not intimidating, not blustering. This is reflected mechanically by using two rolls for Diplomacy: the usual Quick Contest for an influence skill, but also a regular Reaction roll. The actual result will be the better of the two.

Had Rex’s 4 CPs been used to buy the Diplomacy skill, he would know it at a level of 10 (it’s a Hard skill, not Average). He isn’t trying to bully Kay, or vamp her, but rather talk to her calmly and explain how important it is that he see Cooper. The GM rolls against Kay’s Will of 12 and fails by 2, with a 14. He also rolls a normal Reaction roll (since Rex is using Diplomacy) and gets a 13, a “Good” result on the Reaction Table (p. 3).

Roll 3d6: if you roll 3 through 11 (that is, you either succeed against the Diplomacy skill of 10; or fail, but only by 1, where Kay failed by 2), Rex succeeds at being diplomatic — Kay’s reaction to him is “Good,” she understands his situation, and she allows him to disturb Cooper’s nap. Any result of 12 or more would normally give Kay a “Bad” reaction, but — since Rex is using Diplomacy and the GM’s Reaction roll was “Good” — he can’t actually get a lower result than “Good.”

When encountering NPCs in a game, outside of combat, it can be important to have at least a point or two in an influence skill (or skills). Trying to bluff, or intimidate, or talk your way past an NPC is almost impossible if you have to rely on defaults!

So, now that we have a pretty firm handle on using a variety of skills, next week we’ll leap into the fray with our first post on… combat.

(One minor point: after today, I’m going to try posting on Wednesdays instead of Mondays. It’s just an easier day.)

An introduction and welcome series for those brand-new to GURPS.
View the entire series