A most lovely GURPSDay to all! Time once again to enjoy the bounty of GURPS goodness that Thursdays bring.

One of the generous and so-appreciated Game Geekery Patrons recently asked me about tips for running an in-store GURPS demo, which is a question that literally pops up on every RPG community I follow multiple times a week, so I thought I would expand a bit on this post from a few months back.

The internet is filled to bursting with GMing advice, so it’s unlikely any of this will rock your world. But every GM has their own way of doing things, their own standard operating procedures, and even after all these years I often pick up helpful advice and ideas by watching how others do their thing. I’ll try to avoid rehashing too much. 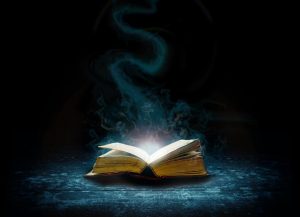 Most other posts in this “Adventure Creation” series are highly detailed, step-by-step deconstructions of specific games as they were put together. There’s a lot of value in that, and I plan to continue those posts for future games, but today is much more general in scope.

For the sake of this post, I am assuming the one-shot game is for four players, meant to be completed in four hours or less. You may need to tweak things a bit for bigger groups and more/less time to play.

There are three ingredients to any RPG game, whether it’s a one-shot or a years-long campaign: the rules, the characters, and the adventure.

The GM should know them well enough to run the game, period. During game play is not the time to be looking things up! You don’t have to know all the rules, but you should have a solid understanding of the ones likely to come up in your one-shot. This is especially true when you’re running a demo, since the players are there specifically to check out the rules you’re using. Related note: that also means no house rules, since that sort of defeats the purpose of a demo. If you’re streamlining certain things for new players, be sure they’re aware of that.

If you get stuck in a rules corner, as soon as you feel that impulse to grab the book and start flipping, just admit that you’re unsure of how the rules handle that specific situation, make your own judgment call, and move on. Ideally, you’ll have a few minutes after the game to check for the official answer, but even in a demo game I think “fun” should beat out “rules.”

If you run a game where all the players are having a great time even though you didn’t know a couple of rules, they will still leave the table with glowing memories of the game. If you run a game that is technically correct in every aspect but the action keeps getting interrupted and the players are bored while you go rules-fishin’, they may never play that system again.

For pre-gens, keep the following in mind:

I try to make sure every group of PCs has at least one character whose main focus is Social Interaction, Combat, Sneaking Around, or Support. Various genres need tweaks to those roles, and you can certainly expand them to differentiate the PCs from one another… a Combat character, for example, could be Ranged, Melee, Unarmed, etc.; Support could be Healer, Hacker, Investigator, etc. But at least one of each gives the party a broad base to work from.

Specific to GURPS, try not to get too hung up on point totals. What I usually do is build the character that seems likely to cost the most points first, then match all the other PCs to that one. So, you create that Barbarian and their point total comes out to 260 points — if the Wizard comes out to 245, you have 15 points to play around with for extra skills, maybe a new advantage. If the Wizard comes out to 275 points, you either prune him down a little to hit 260 points, or you make the Wizard the new template and throw another 15 points at the Barbarian to bring him up to snuff.

For the last year or so, I don’t always even bother putting point totals on the character sheets — does it really matter if the party point totals are 245, 245, 250, 260, 260, and 270 instead of all 250? But if you are going to include the point totals on the sheet, I’d recommend they all match (to avoid players feeling like they got “the weak one.”)

Also, try to duplicate as much as possible to make your life as GM easier. Meaning, all of my pre-gens have a Move of 6 (or 7, if they’re faster than everyone else; or 5, if they’re slower). Everyone’s primary skill is 16 (or 18, or whatever). Everyone has a Dodge of 10 (or 11 if they’re a hardcore warrior). This can obviously be taken too far to where all the PCs feel the same, but as long as every character is fun to play and has their own unique niche in the group, it simply doesn’t come up.

For the individual characters themselves, I ensure each PC has at least one skill to:

I also usually put the following skills on all character sheets because they come up frequently enough that it’s useful to know a character’s score, even if it’s at the 0-point default level: Climbing, Driving/Riding, First Aid, Search, Shadowing, Stealth, Swimming, Throwing.

Most importantly of all, though, is to make the characters fun! Make them one of the other characters’ siblings, or childhood friend, or rival, or lover. Choose unusual gear or backgrounds for them. Give them an odd disadvantage like Pyromania, or a Delusion that they are the Squirrel King. It’s tough to have a boring game with a group of interesting and fun PCs!

Finally, once you’re familiar with the rules and have a solid group of pre-generated characters, you need an adventure to send them on. In addition to the already mentioned Adventure Creation series, I have a couple of one-shot adventures available here for download.

The bottom line for one-shot adventures is: keep it simple. From the moment you sit down at the table for a scheduled game the clock is ticking, so the more streamlined you can make the adventure, the better. You do not have to railroad the players to go where you want them to. There is no reason a one-shot game can’t be just as free-wheeling and driven by player choice as an ongoing campaign is, as long as you don’t mind making things up as you go. But the more concise and clear the adventure you’ve prepared is, the easier it is to make those things up.

I tend to start with the setting itself. Intergalactic federation? Underwater base? Long abandoned dungeon complex? You need to decide where and when your game is taking place before you can design a story for it.

Knowing the setting and the villain usually makes a logical plot clear. “Overlord Zexes is trying to move a shipment of pulse grenades past the PCs, who are station security,” or “Baron Galit’s men have made off with the Princess’s dowry, and the frantic king sends his best men to get it back.” You aren’t writing your magnum opus here, just trying to fill a few hours with some laughs and role-playing goodness. Give the PCs a goal, throw a few obstacles in their path and some way to succeed, and you’ve got a game.

There are myriad ways to structure your adventures. I tend to go by “scenes,” like set pieces from a movie.

For a four-hour game, I plan on five scenes. The first is the Intro, where the players are introduced to the setting, their place in it, and immediately presented with the goal of the adventure. If this scene is action-packed, so much the better.

In my experience, it is very rare for an entire group of players to ignore the obvious story goal. They have signed up and showed up for the game with every intention of enjoying themselves, and following up on the GM’s story hooks is the easiest way to do that. If they do choose to ignore the story hooks, just follow their lead. They will go to locations, choose actions, that sound fun, so try to respond to that.

If you offer up a classic whodunit mystery but the entire party decides to attack the first shady looking character they see — they want combat, give it to ’em. If you offer up a dangerous battleground and they decide to spend two days going around it so they can get to the next city — they don’t want combat, focus on something else. At that point, it’s all about responding to the players’ lead.

Okay, so back to the scenes. The last one is the story’s Climax — the revealing of the victim’s husband as the murderer, an airship battle over London, whatever it is. It’s also a good idea to have at least one Standalone scene that you can remove if the players are taking longer to reach the Climax than you expected, something that can be dropped without affecting the unfolding of the plot — an ambush by the villain’s forces, an old enemy showing up, an environmental obstacle (like a storm or power outage).

I try to make the last two scenes a bit less combat-oriented: puzzles to be beaten, clues to be discovered, codes to be deciphered, that sort of thing (though, the potential for combat is there as well — what can I say, players love to kill things!). And there you go, bam — five scenes.

I’ve already written quite a lot about my adventures here on Game Geekery, and looking over those posts should give you a good idea of how all this plays out when going from theoretical to actual. Creating entertaining one-shots is much more an art than a science, but I believe those posts can be illuminating.

Finally, there are some resources besides the GURPS Basic Set I consider absolutely indispensable for GMs looking to create their own one-shots.

The first is “Robin’s Laws of Good Game Mastering.” I can’t recommend this book enough — quite simply, it’s the best eight bucks I’ve ever spent on gaming. I re-read it all the time and love it more than any man should. Rumors that I have reproduced the text as full-sleeve tattoos are entirely unfounded.

Next up are the GMing books (Never Unprepared, Odyssey, Focal Point, and Unframed) from the fine folks at the Gnome Stew blog (an excellent resource in its own right). I don’t re-read these quite as often (due to their length), but they are extremely thorough, well-written, and helpful. They are also system agnostic, a valuable trait for the GURPS GM in a D&D world!

Lastly, the website The Alexandrian is chock full of excellent GMing advice, particularly their posts on “Node-Based Scenario Design.” Definitely worth checking out.

I hope you found some useful bits in the above. The best advice is to relax and have a good time (the way players do!). Ours is a social hobby, and we come together looking to enjoy a shared story for a few hours. If you put in a bit of effort to present a fun adventure and listen to your players, they’ll love you for it.

Please point out anything I forgot or share your own tips in the comments. Get out there and game!