Search
Menu
Categories
How to Be a GURPS GM

“How to Be a GURPS GM” is my first published book, released as a PDF on August 7, 2014 by Steve Jackson Games.

I wrote it because the GURPS tabletop role-playing game has suffered for many years from an undeserved reputation of being too complex, too difficult to learn, or requiring too much math. None of these things are true, and I have long felt that they cause far too many gamers to miss out on a truly great system.

GURPS is a very fun, unbelievably versatile system absolutely worth checking out for yourself* – my sincere hope is that this book encourages tabletop gamers to give GURPS a second look.

* A free copy of “GURPS Lite” can be downloaded here at absolutely no cost.

A couple of important notes:

I’ve been extremely pleased with the book’s reception. Here are all of the reviews I’m aware of:

Currently on Warehouse 23, the Steve Jackson Game online seller, it has 4.5/5 stars (from 15 responders).

Here are some of my favorite comments from Facebook, Twitter, and especially the Steve Jackson Games GURPS Forums. (Authors’ names redacted).

The more “official” comments were extremely humbling also. In addition to the complimentary announcement posts by Kromm and Steven Marsh, they have said some wonderful things in forum posts like…

“FWIW: I’ve been playing GURPS since 1986 – i.e., since it was Man to Man and just a combat system, and then through four editions that span 28 years. I’ve also worked on the game since the summer of 1995, or for 19 years (more like 20 years, if you count my first freelance assignment in the autumn of 1994). And I developed the current edition. Despite all that, I still found useful tips in Mook’s material, and even in words of my own that I’d forgotten or never looked at next to other things I’d written.”

“This isn’t just newbie advice — it’s a distillation of all the advice given here on the forums, with almost half of the book being direct quotes of advice that Kromm has given (here) on a wide variety of topics, and the other half being Mook’s carefully thought out walkthroughs, further explanations, etc.”

“It’s early to say anything too definitively, but sales over the first 3.5 days have been very promising. (So far, it’s outsold most of this year’s releases in each oftheir first four days.) Given that it was a title with no advanced warning, anticipation, or promotional drive, I’m quite happy with how it’s doing.”

I could not be happier with the response thus far!

Store Page (including a free preview) 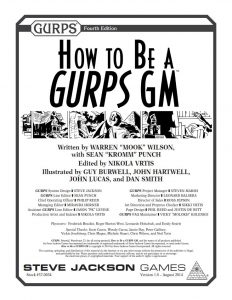