This is Part 2 of my dissection of game prep for a recent GURPS convention adventure — if you need to catch up, Part 1 is here.

When last we left my brain, I had 8 pre-gen characters in very rough form. A couple days later I spent my “lunch hour” (3:00 – 4:00 a.m.) jotting down a more formalized set of notes of the things I had been mulling over in my brain. 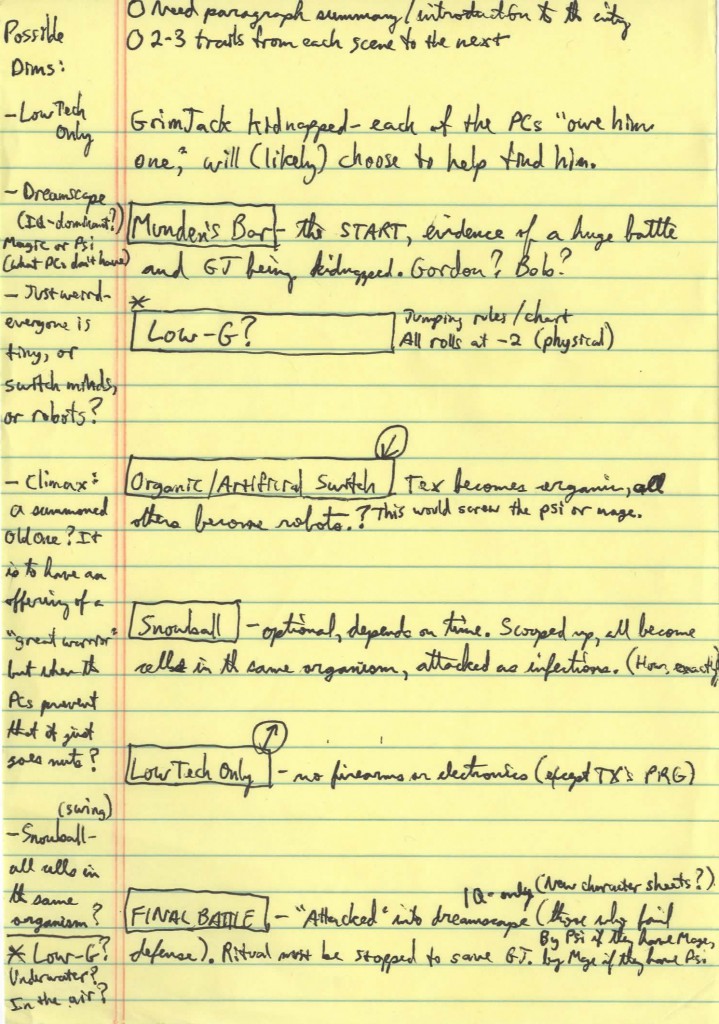 First, a two-line synopsis of the game, mostly from Steps 1 and 2:

“GrimJack kidnapped — each of the PCs ‘owe him one,’ will (likely) choose to help find him.”

In the left margin I brainstormed a few different dimension types to use, and ultimately wrote down six as the “nodes” of the story (laid out in a most excellent post here). As a basic skeleton, I imagined the flow of the story going something like: start at MUNDEN’S, follow the clues to a LOW-G dimension, then a LOW-TECH (note: arrows indicate swapping order) only dimension, a roaming SNOWBALL pocket dimension (only if the players were burning through the adventure way early), an ORGANIC/ARTIFICIAL SWITCH dimension where organic beings become robots and vice-versa, culminating in the FINAL BATTLE scene against the cultists who kidnapped GrimJack in the first place.

Even then, that seemed like an awful lot for a four-hour game. But since I still had time left on my break, I wrote a second page. 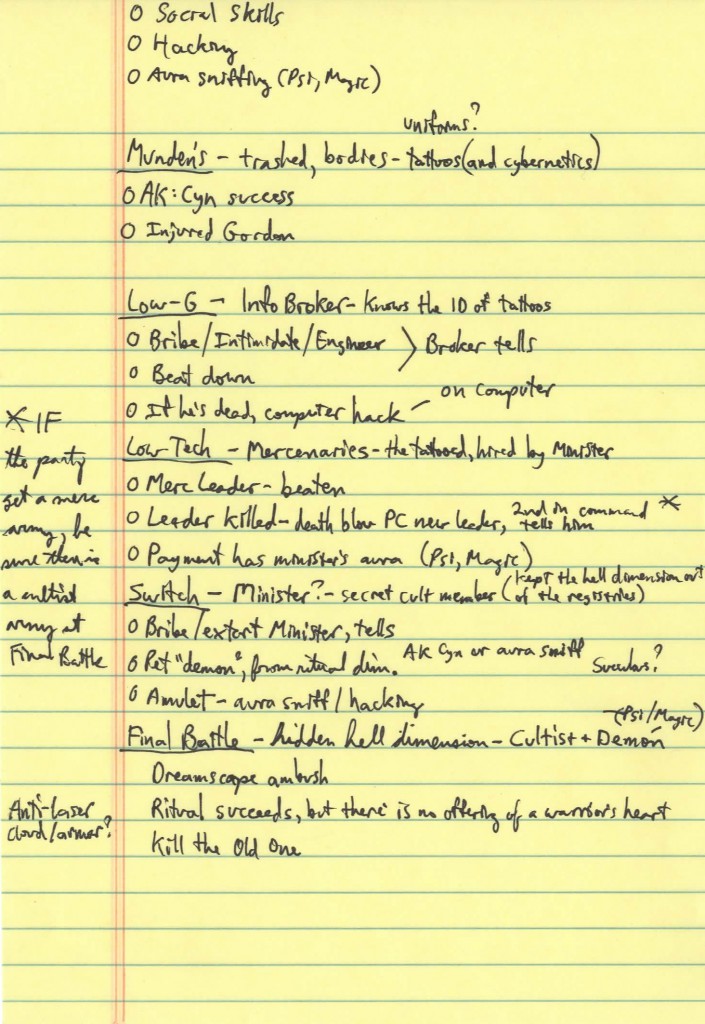 This sheet added in the details of what could be found at at each node (or scene), as well as three separate ways the party could potentially move from one to the next. So now the story was looking like:

The game would begin with the carnage at Munden’s. The infobroker NPC would claim the mercenaries were members of The Dirty Hands, and The Dirty Hands would reveal that Zoning Minister Harnsworth hired them. Harnsworth, in turn, would admit to being part of a secret cult intent on summoning an ancient “god” to the city (using GrimJack to satisfy the ritual offering of “the heart of a true warrior”), leading to the Final Battle.

It’s important to note that this is NOT the way I would ever expect the game to actually go when played — players almost always choose to do things other than what I consider likely, which is where most of my fun comes from. This is just how I could envision things unfolding IF the PCs were characters in an existing story (which they are NOT. Did I mention that?)

Now I was certain that this was probably twice as much as I would need. I made a note to cut the outline down to 3-4 scenes instead of 6 the next time I worked on it — but I never really did, at least not until I was already at the con!

With just a few days to go before the con, I spent a good while turning my previous character sketches from Step 3 into full-blown GURPS characters, with the help of the ever-useful GURPS Character Assistant.

First I made a “template” character to use as a base, one with all of the skills and traits that all 8 of the pre-gens would share: the universal skill list from Step 3 (Area Knowledge, First Aid, etc.), the Character Point total (I settled on 250), that sort of thing. I was intent on making each character come to exactly 250 points, something I wouldn’t really fret over quite so much in an ongoing home campaign. For each I filled in a Simplified Fillable Sheet as well as printed a full GCA character using the utterly brilliant Phoenix Sheet. When finally tweaked and detailed just how I wanted, I printed out two copies of each (one for each group). I also wrote out a brief introductory sheet for the players in case they were new to GURPS (with things like, “To hurt an opponent from far away, use the Guns skill,” “To influence how someone reacts, use the Fast-Talk skill,” etc.)

One thing I tend not to use on convention pre-gens are a lot of behavior- or personality-type traits, like “Shy,” “Pyromaniac,” “Addiction (Alcohol)”, etc. I figure if I give players a pre-gen character with all the mechanical stuff done, they can role-play whatever personality they want. In practice, though, I’m getting the impression most players prefer to have at least some direction along those lines, so I may start including them for future games.

Thursday, the day before the con, I scrambled to finish up last-minute details. You can find most of the materials below on this page for viewing and download.

I also wanted to type up a bullet point list of the adventure itself, but by the time I finished all the above it was late and I was exhausted. So at this point everything I actually brought to the convention with me was done!

Friday and Saturday I enjoyed the games I signed up to play (as detailed here and here), then late, late Saturday night (before running my first game on Sunday at 9:00 a.m.) I wrote out some quick notes on my trusty small legal pad: 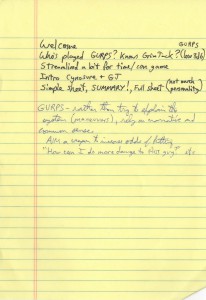 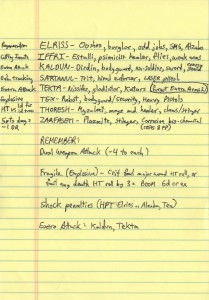 Page 1 was simply things to ask/say before the game got underway, like who had played GURPS before, an overview of the setting, the format of the character sheets, that sort of thing. Page 2 was a brief summary of the characters to share with the players so they would have some idea what they were picking, and a few rules to remember during the game (for my benefit). Neither of these were used once the game actually started.

So, what were my “notes” while actually running the game? Just two more legal pad pages. I’ve subsequently typed out the contents (here), but here are the originals: 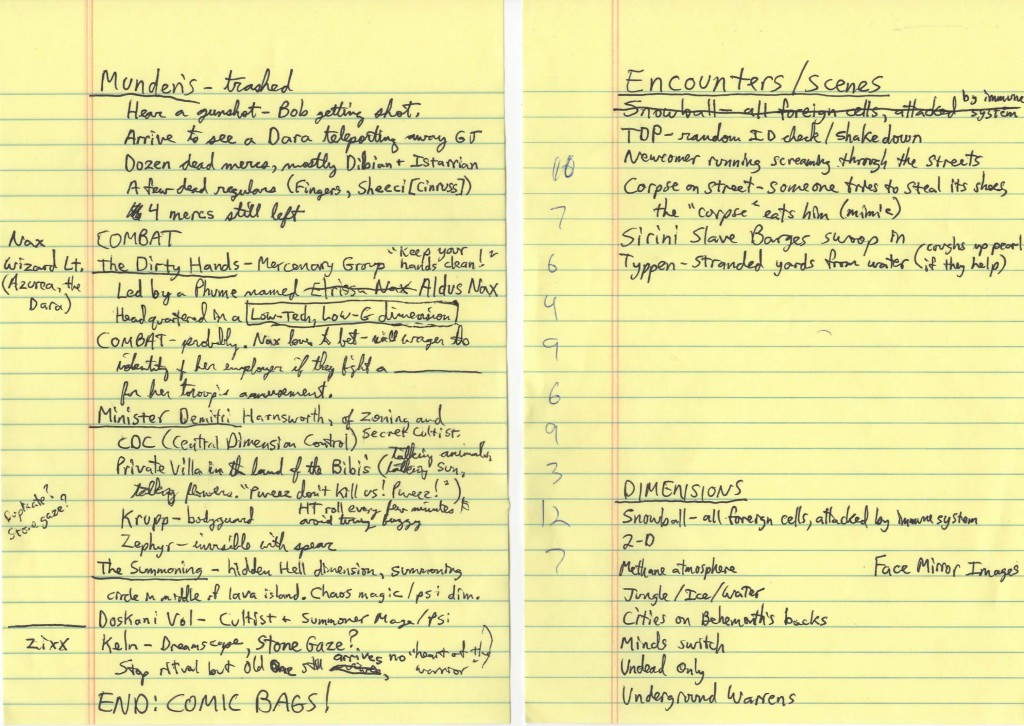 I also whipped up 5 each of the following cards, giving me 10 pre-made NPCs of four different difficulty levels: 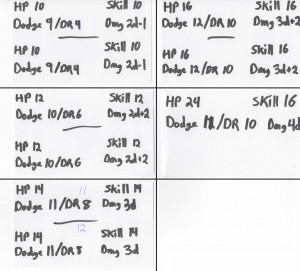 Not full sheets of course, but definitely enough info to use for mass combat scenes and still keep all the numbers right.

And so, that’s the entire blood and guts of this adventure, from zygote to in the flesh. I started small, added a bit, added a bit more, printed it all out and headed to the con.

Happy to answer any further questions, and hear from other GMs on how you do your own prep!